Tools of the Trade
Shortlist 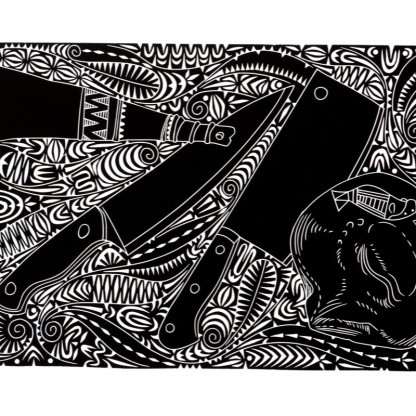 Aboriginal and Torres Strait Islander people have relied on the sea to provide food for thousands of years, and they could choose from a wide variety of food before Europeans came to Australia.
They also chose foods according to the season and the geographic area where they lived, took only what they needed, and were selective about the sex and maturity of animals taken to allow resources to replenish and to prevent wastage. Fishing and collecting marine resources and preparing traditional meals continue to be an important part of Aboriginal and Torres Strait Islander culture and diet.
Tools of the trade focuses directly on the culinary implements that have been used to cut, score, gouge and scrape food items in preparation for cooking both in traditional times and now.
Amongst the swirling minaral lies a large kitchen knife, a meat clever, a turtleshell coconut scraper and a pearlshell that was used to dissect dugong. The etched markings on this shell act as a guide pinpointing exact cuts in the animal so that it can be broken down for community distribution and cooking.

Thank you for subscribing.